For scholars attending one of GHS’s NEH funded workshops or institute, visits to key sites played an important role in their understanding of the African-American experience in the Georgia Lowcountry. Visits to the streets, squares, and structures of Savannah’s Historic Landmark District including the Beach Institute Neighborhood and sites associated with the slave trade and the rise of Jim Crow segregation illustrated the social, economic, cultural, and religious life of African-Americans in an urban setting.  Visits to Ossabaw Island and Sapelo Island, including Sapelo’s Hog Hammock community, focused on the lives and distinct cultures that developed in the plantation island communities of Georgia’s Lowcountry. Together these experiences illuminated the impact of geography, environment, and economy on the sustainability of African-American family life; gender roles; the interaction of place and culture; the creation of early African-American churches; the role of informal slave economies; Reconstruction on the barrier islands; and the enduring influence of the Gullah-Geechee culture in the twentieth century and beyond.

Instructions: Hover over the pins to see the location of each site. Scroll below the map to read about each site and find places for further discovery. 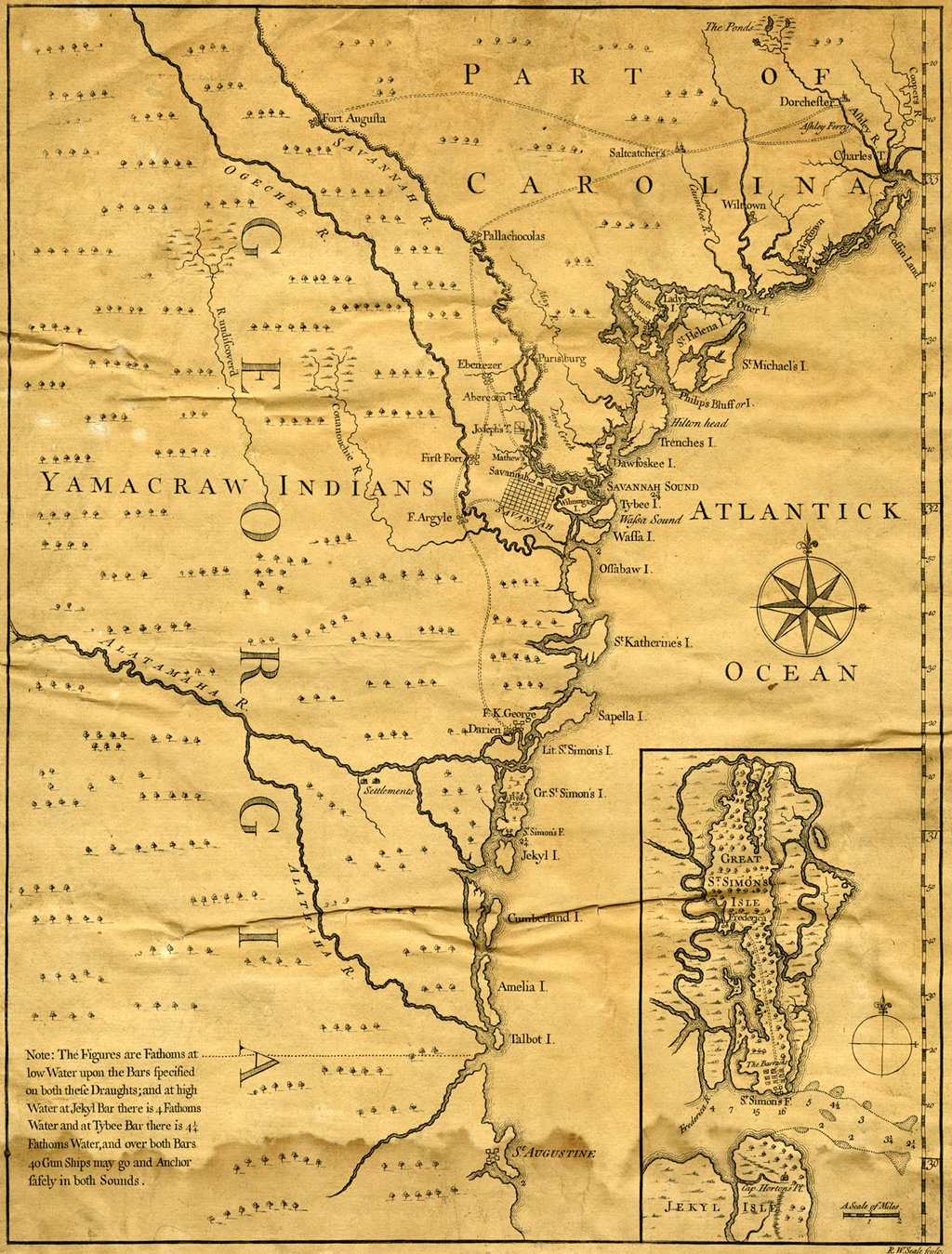 Known as “The Weeping Time,” the 1859 slave auction in Savannah was one of the largest sales of enslaved persons in U.S. history. Over the course of two days, 429 men, women, and children were sold to satisfy the creditors of planter Pierce M. Butler. The sale took place at the Ten Broeck race course on March 2-3, 1859.

The streets, squares, and structures of Savannah’s Historic Landmark District give a context for understanding how urban slaves created their own unique culture. Because blacks and whites and free and enslaved mingled constantly in this environment, urban slavery was more fluid and less rigid than its rural counterpart. Savannah presented greater economic and social opportunities to enslaved men and women – as both skilled and unskilled labor – and thus a greater degree of independence than slaves found on plantations.

From the Old County Courthouse to Bay Lane and along Factor’s Walk, downtown sites reveal how the inhumanity of the slave trade was part of the everyday commercial landscape of business in Savannah. Many of these same sites also represent the strength, endurance, and spirit of a people who transformed these places of sorrow and loss into Freedman communities through the establishment of schools, businesses, and homes. Indeed, this is evidenced quite clearly in the post-Civil war conversion of a slave market into a Freedman’s school – a structure that still stands today in the middle of Savannah’s busy tourist district.

Accessible only by a special pre-arranged ferry, the 26,000-acre island of salt marsh and maritime forest is a heritage preserve cared for by the Ossabaw Island Foundation. The island is unique for several reasons: it possesses a peerless archeological site, well-preserved plantation records, the founding of a traditional African-American community on the coast, the connections of a barrier island with an urban center like Savannah, and illuminates the role of Northerners in shaping the coast of Georgia.  In 1995, Ossabaw was listed on the National Trust’s 11 Most Endangered List and in 1996 it was placed on the National Register of Historic Places.

The island is an excellent place to study the ways in which coastal Georgia was part of the cultural and economic exchange of the larger Atlantic world.  Ossabaw tells an important story about the African-American population of this region and its unique culture; some 205 African Americans (Census of 1860) lived on the barrier island at the beginning of the Civil War and developed a culture that drew deeply on their African roots.

The historical focal point of the island revolves around three tabby slave cabins on the north end, described by the state archaeologist as “one of Georgia’s most significant archaeological and historical sites.” The complex includes the cabins constructed ca 1820-1840, an associated yard and field system, and rich archaeological deposits relating to African-American life dating to the pre-Revolutionary era. The tabbies have kept their original appearance and yet were lived in as late as the 1980s. The cabins offer the opportunity to tell three different stories – that of the enslaved workers of the colonial and antebellum periods, the freedmen of the second half of the nineteenth century and their struggle to carve out an existence for themselves in Reconstruction America, and the African-Americans of the twentieth century who lived on the island or in small communities on the mainland and came over to work.  Giving this story particular impetus is the fact that several families who live in Pin Point, Georgia (birthplace of Supreme Court justice Clarence Thomas), five miles away by water, are descended from those who were on the island in the late nineteenth century.

Sapelo Island is a 16,500-acre island located midway on the Georgia coastline on the eastern fringe of McIntosh County. Archaeological investigations have dated the human presence on the Island to 4,500 years ago. Europeans first came to the Island around 1537 establishing Spanish missions. Ownership of Sapelo Island passed through several hands, but by 1834 planter Thomas Spalding acquired most of the Island. Sapelo Island affords a glimpse into the rich cultural history and communities of African Americans in Georgia’s barrier islands, and the island offers a wonderful opportunity to explore the ways in which geography, environment, and economies shaped the development of African-American culture in the nineteenth century.

The story of African-American life and culture on the island begins in the early nineteenth century and encompasses slavery and plantation economies, the establishment of freedmen communities during Reconstruction, and endures into the twenty-first century with the presence of a small, close-knit community of African Americans who trace their lineage to enslaved West Africans. The plantations of Sapelo Island were the largest producers of Sea Island cotton in antebellum America. It is estimated that just before the Civil War, 370 enslaved people lived on Sapelo Island growing sea-island cotton, sugar-cane, and harvesting the island’s live oak trees.

Today, all but a few hundred acres of Sapelo Island is owned by the state of Georgia. The Island is home to the Sapelo Island Reserve and Reynolds Mansion, a state park, The University of Georgia Marine Institute, the Sapelo Island National Estuarine Research Reserve, and Hog Hammock community. The Sapelo Island Cultural and Revitalization Society, Inc. (SICARS) and the residents of Hog Hammock continue to promote their history and the Geechee culture through guided tours of the islands, cultural programs like the annual fall Cultural Day Festival, and other projects.